Hi Everyone!  I am writing to you as we pass through Oregon after an eventful few days in California on the road with Embrace. The original plan was to stop in Portland for a day off but our bus ran into problems so we had to wait for a mechanic all night in San Francisco.

It's great fun being on the road but its not always 'plain sailing' Boom Boom!(pun intended). I'll never forget the site of a slightly inebriated Stel shining his phone under the bus to help Kurt the driver identify the problem his white shirt ending up covered in oil!

We've had a great time with Embrace from the word go and it was good to get to know them on the night we arrived at the little known dive bar 'Kitts' in Huntington Beach. After a night of fun and relaxation it was off on the road on our lovely tour bus. Tour buses in the US are in the main a class above the ones at home. The lounge opens out when we are stopped and all the bunks have cable tv in them! Theres also the added bonus of our entertaining driver Kurt. Barry has been chatting to him up the front on the long drives so I think he's Kurt's favourite now.

The first show was at House Of Blues Anaheim which is situated in Disneyland. Getting into Disneyland is the same as getting into a new country as we all had to queue up and show the border patrol our passports! Thankfully the show went smoothly which was good as we had Yahoo streaming it live across the world.(hope you enjoyed watching).

We were parked up beside the Sheraton hotel so we spent a few hours by the pool before travelling onto LA for the show at The Roxy a legendary rock venue on Sunset Strip. It was a frustrating show for Stel as he battled problems with his bass but ultimately we got through it and the LA crowd was great. We stuck around to watch Embrace who impressed, pulling out the crowd pleasers (Come Back To What You Know, All You Good Good People) & some tracks from their brilliant new album (Richard McNamara's emotive vocals on 'Refugees' a particular highlight). 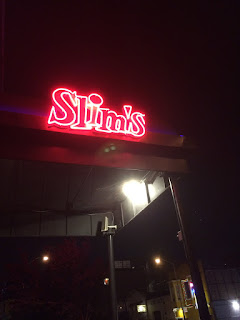 Danny was a bundle of energy getting the crowd going at the intimate Roxy as if we were in an arena. It was great to catch up with some old friends at the Rainbow next door after the show. There was no sign of Lemmy but we did spot Ron Jeremy (I think Ben saw him in some films when he was a teenager I wonder if they won any oscars?) It was great to see James Dale from Goldheart Assembly and Romeo from The Magic Numbers again.

No time to stop in LA so it was back on the fun bus to San Francisco. Its been ten years since we last played Slims and we're really impressed that some fans came back for more all these years later! We are so grateful to our long term fans and it seemed from the mix of ages that our music has been passed onto younger siblings and children of fans too. Both bands agreed San Francisco was the best show of the tour as the crowd were really up for it. Which brings you right up to date. Hopefully next time we catch up I'll have some Canadian tales to tell you.
Posted by James at 09:46 2 comments: