Its been far too long since I wrote anything for the website so here I am & theres been plenty going on in 2015 to tell you about. 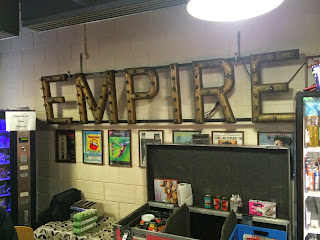 I am writing from my dressing room at Ipswich Regent Theatre where we are near the halfway point of the Mike & The Mechanics UK Tour. The shows so far have been great. It's been good to tick off such stunning venues as Sheffield City Hall & Gateshead Sage Theatre from the list of places I've played. The connection with Mike And The Mechanics started when Harry Rutherford agreed to produce my album & we subsequently roped in his talented father Mike to play some guitar. Needless to say when the opportunity arose to support them around the UK it was an easy decision! Much of the Mike & The Mechanics audience haven't heard of myself or Starsailor so its been great to showcase the songs from 'Turning Point' to a whole new audience. Because the venues are seated and the audience a bit older I am usually playing to an almost full and captive audience which is good. I am most excited to return to The Royal Albert Hall where I played only last year with Starsailor. To play such a legendary venue twice in such a short space of time is a great honour.

Another recent highlight was playing the Hard Rock/Peroni village after the Wales v Italy 6 nations game in Rome. I'm more of a football man usually but it was impossible not to get caught up in the excitement of that thrilling final day where England, Wales and Ireland had everything to play for. There was a good mix of Italians and Welsh people in the crowd who were all on great form and it made for a very enjoyable show.

A few weeks ago up in Manchester I once again donned my judges hat to choose the winner of the Hard Rock Rising competition(Manchester heat). I have done it before down in London so it was good to see that the North West is still producing great music too. All the bands on the night were excellent but House Of Thieves(@HOTbandofficial) from Derby were worthy winners in the end.

Next up for me is the inaugural Isle Of Wight Dragon Boat Race in aid of WellChild which should be a fun day out for a great cause. Finally. Things have been busy in Starsailor world too(Zermatt Unplugged was amazing) so I promise to write something soon to go on the Starsailor website.